David Bennett Posted on November 14, 2022 Posted in Thing of the Day No Comments Tagged with augmented reality, metaverse, virtual reality 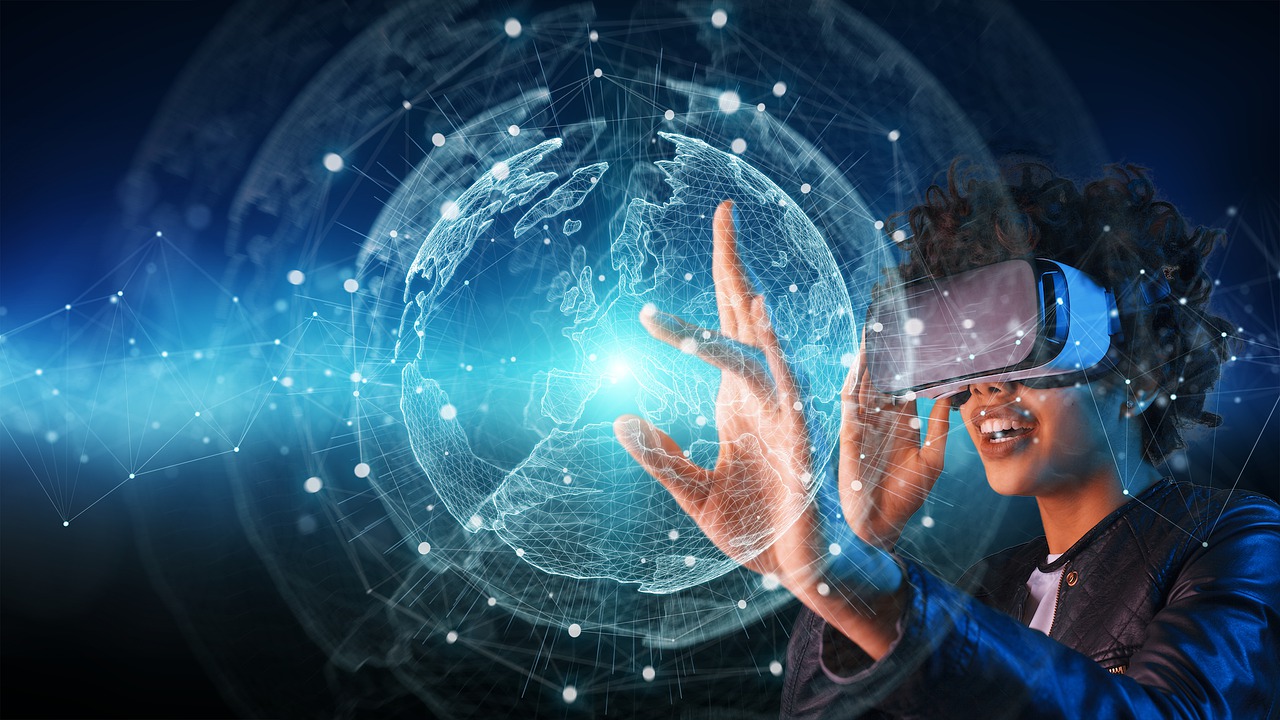 Do you remember Second Life? It was (is) a virtual reality (VR) environment where people like our Faculty Librarian (Technology) would hang out as virtual avatars and explore the possibilities of virtual communities. Similar in some ways to a peaceful Minecraft universe (without the plague of strange exploding cactus creatures or the undead), Second Life developed a real-world economy, and has been used for everything from showcasing new fashion releases to manufacturing in-game goods for sale. Companies still hold online presence in Second Life and do business there. Now Second Life is being given new life, reborn using new technology under a variety of other names as the “metaverse”. Named after a fictional dystopian virtual world from the 1992 science fiction novel “Snow Crash” and popularised by the Spielberg film “Ready player one”, metaverses are collaboratively developed environments beyond the control of any one person that the hype is currently touting will replace the two-dimensional internet we know now with a three dimensional, immersive VR world in which people represent themselves with avatars – virtual representations of themselves.

The consensus is that companies are staking a claim in what might be the next disruptive technological revolution but this is at least two industrial revolutions away and there is many a slip between cup and lip. The metaverse is too tempting for technology companies to ignore but that doesn’t mean it is necessarily the future, just one possible future – and even that remains somewhat distant.

Facebook plans to hire 10,000 staff in Europe over the next five years to build a metaverse to build a VR/AR social platform. The change in name from Facebook to Meta was deliberate: Zuckerberg now claims Facebook is a “metaverse first” company, a shift witnessed by the sale of its Oculus VR headsets, and that a Facebook account will not be necessary to use other metaverse services. This might be a sign that the jig is up and Zuckerberg believes Facebook has outraged enough of its users that it no longer has a future or simply a shift in direction towards establishing a presence on the new entrepreneurial frontier. Microsoft has announced that Mesh will allow 3D capture technology to recreate avatars of people in real space and ‘holoport’ them into virtual metaverse spaces. Epic Games, who built Fortnite, aim to develop a science fiction metaverse. Barbados intends to build a diplomatic embassy in the online world of Decentraland.

Other companies, such as Earth2, offer a real world clone of Earth where individuals can invest in land, develop it by crafting jewels and inserting them into a land area to augment it, and finally sell it (presumably for a profit). The game attempts to make a profit by developing virtual a world with a speculative real estate economy. I leave it to you to decide whether such ventures are digital entrepreneurship at its best or pyramid schemes at their worst, but the BBC report that nearly $2 billion has been spent in cryptocurrency on virtual land in the past year alone as people and companies speculatively invest in metaverse real estate. If you want to gamble on the metaverse being a great investment, the BBC advise that now is a good time since a collapse in the value of cryptocurrencies has brought virtual land prices down to an all-time low.

However, even those investing are taking a gamble that we will all follow them online. Metaverses are multiple, sparsely populated, and failing so far to attract in large numbers. Those investing now might become the wealthy virtual landbarons of tomorrow but their investment will have been at best very long term, and at worst a dead loss. Even Gartner warns of the risks of investing this early in an emerging technology, particulary one that has yet to even become a single coherently integrated entity. Concerns have also been raised over the extent to which a few corporations might end up controlling metaverses, and whether the metaverse might end up being an extension of the existing internet or some kind of virtual cyberpunk dystopia carved up by mega-corporations. There is no consensus over whether the metaverse will be a marketplace, a 3D internet, computer game, social network, or born-dead technological hype that is superceded by something as yet unconceived that meets business and consumer needs better in the world that arises. As John Lenon observed, “Life is what happens while you make other plans”.

What I find interesting is that I could find no discussion online of the rise of a dark metaverse and the influence of criminal enterprise in this new economy. Are journalists simply not paying attention to the parallel development of the shadow economy, is a lack of underworld investment in this new digital frontier a vote of no confidence or must a healthy economy develop before it can be exploited? Time will tell.

Certainly, there is no consensus or clarity over how people will interact with the metaverse while living their real-world lives. The challenge of switching between the metaverse and real-world concerns, which are never going to go away while we have physical bodies that require care, exercise, feeding, and evolved needs to be exposed to nature and outdoor spaces is not going away, and at a time when most people are becoming poorer, it seems hard to imagine that there will be an appetite to invest in or spend money in a second economy that is not even connected to the things that keep us alive. Second Life attempted to grow an economy and failed, while dark web economies tend to be very much connected to (usually criminal) real world operations.

Needle, D. (2022, October 3). The metaverse explained: Everything you should know. TechTarget. https://www.techtarget.com/whatis/feature/The-metaverse-explained-Everything-you-need-to-know

Ravenscraft, E. (n.d.). What is the Metaverse, exactly? Wired. https://www.wired.com/story/what-is-the-metaverse/

Wiles, J. (2022, October 21). What is a metaverse? And should we be buying in? Gartner. https://www.gartner.com/en/articles/what-is-a-metaverse