David Bennett Posted on May 29, 2019 Posted in About your Library, Thing of the Day No Comments Tagged with archives, local history, warfare

In November 2018, I blogged about Portsmouth Municipal College and its students during the First World War. To tie in with the D-Day 75 commemorations, this piece looks at the college in 1944 and the continuing impact of events earlier in the Second World War. The student magazine the Galleon once again gives us an insight into what it was like to study or work at the college in wartime.

By 1944, life at Portsmouth Municipal College had unsurprisingly undergone significant change and disruption. This included production of the Galleon magazine itself, which had not been published at all between Summer 1941 and January 1944.  In the early years of the war, both the Galleon editor and sub-editor were women, in a first for the student magazine.

The junior students had been evacuated from Portsmouth on 1 September 1939 to the villages of Longstock and Leckford near Stockbridge in Hampshire. Eighty three students from the Commerce and Domestic Science departments were evacuated, some living in Longstock Park house. The students had to learn to adjust to life in the country:

‘Since journeys between the two villages had to be made daily, bicycles became a necessity. Apparently the absence of traffic led to the idea that there was also an absence of danger, and there were a number of minor accidents until the students learned from experience that the surface of a country lane is just as hard as that of Commercial Road’.

Despite the evacuation of the younger students, teaching continued at Portsmouth Municipal College. According to Principal L. B. Benny writing in 1940:

‘the college opened about a fortnight later than the normal date, and the majority of students returned to find a building complete with ‘black-out’ and A.R.P. arrangements ready for the ‘blitzkreig’ [sic.] which now appears to be upon us. It is satisfactory to see how students have accommodated themselves to the changed conditions, and how a number of senior students are helping with A.R.P. arrangements. Our normal work is proceeding satisfactorily, although we are obliged to see our men students leaving steadily at the call of military service –  we regret this but would not have it otherwise, under present circumstances.’

However, looking back in January 1945, the Principal remembered the morning after the infamous 10th January 1941 air raid when many buildings including Portsmouth Guildhall were destroyed:

‘I had been on duty in the streets all the preceding night, during which I had heard vivid accounts of the destruction in this area, and had been assured that the college had been completely destroyed, so that I was prepared for anything I might see. The scene in the square with the debris, and firemen still working on the Guildhall, the tower of which was burning, is almost beyond description, but it was a great and unexpected relief to find the college still standing. We were, however, faced with a number of difficulties. The nearest rest centre at Omega Street School had apparently been bombed, large numbers of persons of both sexes and all ages had taken refuge in the college overnight, and having nowhere to go they all refused to budge… many of them stayed for several days , sleeping on the floors in blankets which were the property of the Army.’

After the destruction of the civic centre, there was pressure for the whole of the college to be requisitioned. A compromise was reached whereby the police had use of some parts of the building and the Magistrates Court took over the college hall. 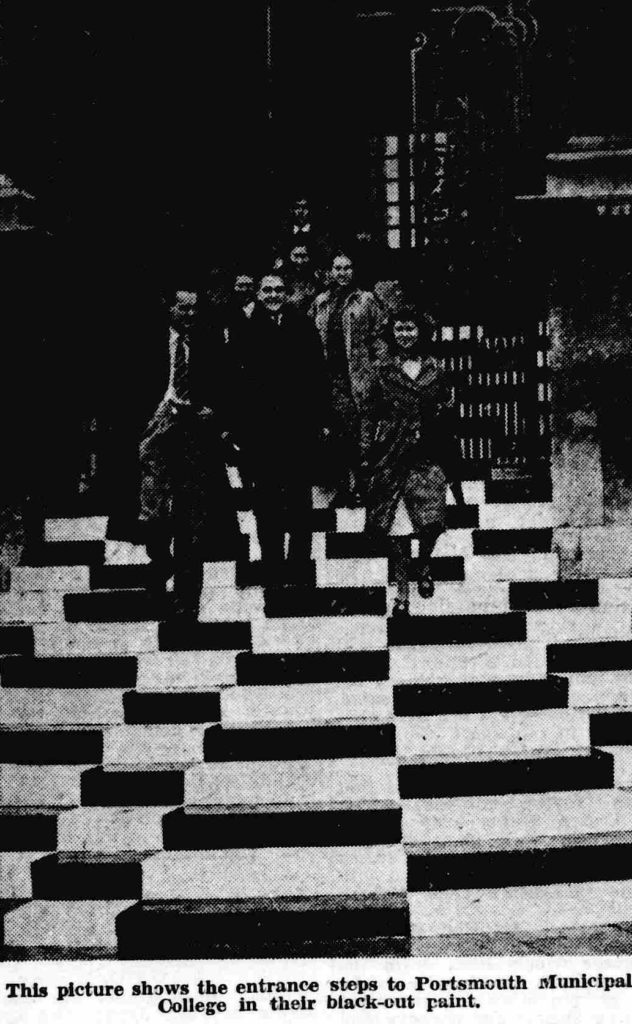 With the sports field also out of bounds as it had been put to war time use by the armed forces, it became difficult to find venues for college activities. Some sports teams continued to play fixtures though, the football team even included ‘two soldiers, stationed here at the college, who played on a few occasions near the end of the season’ and the college was instrumental in the forming of the Portsmouth War-time Netball League. The Dramatic and Musical Society (D.M.S) put on few productions and had a complete break in 1941 as the magazine later reported ‘everyone was too occupied with the real drama of the big blitzes to bother about histrionics’. Tea dances were held in the alternative venue of the Trades Club Ballroom Cosham. The Literary and Debating Society discussed motions including ‘This house objects to the dismissal of Conscientious Objectors by the Portsmouth Education Committee’ which was adopted by twenty-five votes to nine.

However, a letter from the ‘Denizens of Pharmacy Lab’ published in 1941 tried to encourage greater engagement with the various student societies:

‘the days are dark and difficult, I know that at least. Yet, how much stronger will be our satisfaction when we learn of normal college life in years to come- rejoicing in the knowledge that we kept its lifeblood flowing during the difficult days of war’.

Some students also volunteered to attend Harvest Camps where they undertook farm work. There is a daily account of one student’s time at a camp from 2nd -30th August 1940 during the Battle of Britain:

Friday 15th August ‘Listened to news at 8.00 69 planes down. Gosh! Discussion on Land Girls. Did some stooking with Mr Bere Hard work!….. About 10 planes over. Bombs and heavy AA in distance.’

There was a military presence in the college itself and men and women in the services could attend any day or evening classes free of charge if they were ‘appropriate to their educational requirements.’ Courses in radio telegraphy were provided to meet the needs of the merchant fleet.

The 1940 and 1941 editions of the Galleon contain lists of former college students now serving in the armed forces and other wartime roles, and include women in the A.T.S. and W.R.N.S. The magazine sadly notes in 1941 the deaths of three men –  R.A.F pilots L. Toogood and D.W. Rose, and Third Radio Officer Terence Barker Naval Auxiliary Personnel (Merchant Navy).

By 1944, the junior students were still evacuated to the Hampshire countryside where they witnessed convoys of vehicles on their way to the D-Day landings. Students were also still attending Harvest Camps, as a second Galleon article about a camp in Burghclere shows. Portsmouth Municipal College began offering new Domestic Front Classes comprising courses in War Time Cookery, Make Do and Mend Clothing and Handyman’s Work. The bombing of the city was not yet fully over, with attacks on Portsmouth from April to July, including the new V1 rockets.

There were some small signs of normality returning to the college though – two editions of the Galleon were produced during the year, D. M. S. put on two productions and the college was trying to secure the return of its sports ground.

However, when the war finally ended the college was much changed and had to cope with a vastly expanded student population. In January 1946 the Principal writes:

‘The number of students has increased beyond all bounds that seemed likely, and indeed now far exceeds any number that attended before the war. Readers may be interested to know that our day enrolments are almost exactly 1,000 and that considerable numbers could not be admitted. This is imposing, and will continue for some time to impose a very considerable burden on our resources from the point of view of staff, accommodation, equipment, and amenities for students.’

Although, other things didn’t alter quite so much. ‘We can now look forward to our night’s rest without fear of disturbance , and one plausible excuse for the lateness of students will no longer be valid; although I have already found that many are sufficiently ingenious to have replaced it by other specious excuses’.

The magnificent Portsmouth Municipal College building had at least survived the war and is now the University’s Grade 2 listed Park Building.